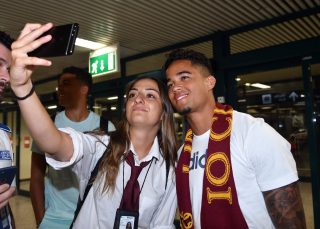 Patrick Kluivert, the father of AS Roma summer signing Justin Kluivert says it was a big jump for his son to join Manchester United and thus he decided to join the Serie A club from Ajax in the summer transfer window.

That’s a fair enough reason for the deal never materialising given how Memphis Depay struggled at United following his transfer from PSV Eindhoven. Since then, Depay has made a name for himself in Ligue 1 with Lyon, but he is still a long way from being good enough to play for a club like United.

“However, he has to keep his feet on the ground. I think United would’ve been too big a jump. Roma are an important club, but he’ll face less pressure there. Roma aren’t obliged to win, they’re a club used to playing good football,” Patrick Kluivert said during an interview with Gazzetta dello Sport, as per Caliomercato.

READ MORE: Man Utd is a commercial cash cow being milked dry as football takes the back seat

Asked if Justin would dream of playing for Barcelona, like his father, Patrick said: “For Justin, it’s the ideal place right now. After that, who doesn’t dream of Barcelona? Having said that, Italian football is catching up and Justin can take advantage of it.

“Roma play a technical brand of football, plus they’ve also done well in Europe. It’s a nice club, plus Justin is a guy who knows what he wants.”

After winning the Europa League in his first season in charge at United, Jose Mourinho was seen on the pitch speaking to Justin Kluivert. Speaking exclusively in the April 2018 issue of FourFourTwo magazine, he was asked about the successful manager said to him: “He said it was nice to see again after such a long time, because he had known me when I was a baby. And he said it was nice to see that I was doing well.”

Patrick is clearly looking out for his son and by making sure he doesn’t make too big of a leap too soon, he wants Justin to work his way up the footballing ladder.

It’s wise and too many young footballers go the opposite route and never end up reaching their potential.