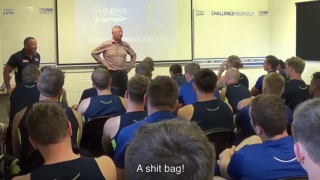 There is a good chance Paul Pogba won’t be a Manchester United player in a year’s time. Perhaps it will be a repeat of history, with his agent Mino Raiola guiding the Frenchman through the Old Trafford exit. And, perhaps Sir Alex Ferguson was right all along.

Pogba’s career began at Manchester United after being signed from the Le Harve’s youth system. Under Ferguson, he made his senior debut in 2011 aged just 18 after coming on in a League Cup game against Leeds at half-time.

At the time that Fergie promoted him quickly up the ranks at Old Trafford he noted that the French midfielder was some talent and they needed to play him saying, “I mean if we hold Pogba back, what’s going to happen? He’s going to leave. You know, in a couple of years’ time when his contract is going to finish. So, we have to give him the opportunity to see how he can do in the first-team and he’s got great ability.”

READ MORE: “Why would we discuss Zidane when there is no job?” – Man Utd source tells BBC Sport

After leaving United for Serie A giants Juventus, Pogba did eventually return to Old Trafford for £89 million but things have quickly soured, and his agent took aim at Paul Scholes today via Twitter, just weeks after his client was initially linked with a move to Barcelona.

Looking back on a bit of history, we discovered that Fergie was never a fan of Raiola. He reacts to a question regarding Pogba by stating his agent was a shitbag. Yes, a shitbag.

United did offer Pogba an improved deal to stay at Old Trafford but Fergie believes that Raiola instead did his utmost to persuade his client to move to Italy.

Once again it seems like Raiola is angling for his client to get another big-money move, which will no doubt make the Italian super-agent some extra cash as well.

With the transfer window closed in England, United can sell Pogba but would be unable to sign an immediate replacement.

This saga is likely to drag on all year and potentially ruin our season as an unwanted distraction.