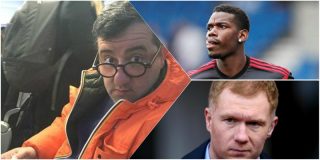 Paul Pogba has been slammed by Mike Phelan over agent Mino Raiola’s transfer threat this morning.

The Frenchman’s agent, Raiola, has claimed on Twitter that he would have to “find Pogba a new club” if club legend Paul Scholes was in charge at Old Trafford.

Raiola was responding to criticism aimed at Pogba by Scholes after two games of the Premier League season.

“Paul Scholes should become sports director and advise Woodward to sell Pogba. Would be sleepless nights to find Pogba a new club,” Raiola claimed via Twitter.

The message has set social media into a frenzy, with ex-United captain Gary Neville calling for Pogba to find a new agent.

In response to Raiola’s tweet, he replied: “There was a time when a player’s ability, consistency, attitude, record and application generated transfer activity.”

A well-calculated response from Phelan to reference the ongoing transfer saga surrounding Pogba this summer.

The World Cup winner’s relationship with manager Jose Mourinho could be a lot better, despite Mourinho publicly declaring he is happy with Pogba.

Barcelona have been strongly linked with a move for the France international, though any deal is unlikely to happen this month. The deal would have to go through before Spain’s August 31 transfer deadline.

This is all very embarrassing on Raiola’s front. It’s a poor representation of any player to see their agent show himself up like that on such a public platform.

If Pogba is to have any future at United – we’ve already run a piece from a fan who has had enough of the Frenchman – he must consider getting rid of his current agent.