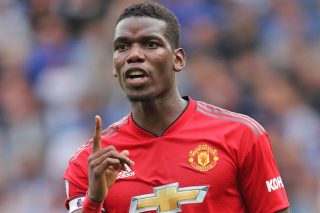 Lee Sharpe has agreed with Paul Scholes that Paul Pogba too often doesn’t produce his best football for Manchester United.

The former winger has said Pogba ‘should be one of the best players in the world… but he’s not.’

Pogba’s agent, Mino Raiola, has launched an attack on club legend Scholes via Twitter over his criticism of Pogba following United’s 3-2 defeat to Brighton.

READ MORE: Man Utd should alleviate the pressure by allowing Pogba to leave

The former Reds star blasted the France star’s inconsistency and accused the midfielder of not being the right fit as captain and of ‘not using his brain enough’ on the pitch.

Raiola hit back, saying Scholes ‘talks for fear of being forgotten’ while hinting that Pogba would have no shortage of offers to join top clubs if he decides to leave Old Trafford.

But on Alan Brazil Sports Breakfast, Sharpe agreed that the World Cup winner ‘has not been good enough’ for United.

Speaking on Tuesday morning, Sharpe told talkSPORT: “His standard has not been good enough, has it?

“We’ve seen the standard he has set for France, the guy is 6 ft 4in and he can do everything in a football match, but he doesn’t produce it often enough in a red shirt.

“But he’s certainly not producing what he can do, week-in, week-out.

“He should be one of the best players in the world and turning it on every week.

This is not the sort of distraction the team needs as we start a new season. Already two games in with one win and one loss, the Reds need to get their act together and start winning games convincingly.

On Monday, we host Tottenham Hotspur, who have six points from their opening two fixtures. Allowing them to bridge a six-point gap at this early stage would be far from ideal, especially with Manchester City and Liverpool winning games comfortably.