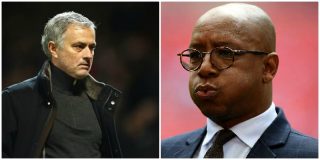 Jose Mourinho risks a “car crash” season at Manchester United in a similar way to when Arsene Wenger left Arsenal, according to Ian Wright.

Paul Pogba admitted that their attitude was wrong in Sunday’s 3-2 defeat against Brighton, as reports of his worsening relationship with the manager continue to do the rounds.

The Portuguese manager has a record of suffering from ‘third season syndrome’ where he falls out with the players and underperforms as head coach in his third year at a club. That’s the main reason to believe Mourinho is a short-term manager, able to get the best out of his players over a short period of time, though at United we’ve not seen too much of that.

Writing for The Sun, Wright believes Mourinho is showing similarities to Wenger’s time in his last years at Arsenal and fails to see United turning things around under his management.

“As much as I respect him as a manager, I can’t see any way it is going to turn around,” said the former Arsenal striker. “We all know about Jose and his third-year syndrome. But, listening to him talk, it’s as though even he has accepted it himself.

“In many ways it’s like the last days of Arsene Wenger. People were watching Arsenal because it was car crash football. United are fast turning into the same.”

Wenger was on a downward slope for years and kept his job for a number of underwhelming seasons because of his previous achievements at Arsenal. For Mourinho, he won’t get that luxury at United and now is the time to deliver.

The board clearly didn’t back him during the summer, so why should we believe they will during the season if bad results continue to put everyone in a bad mood? It could be a lot better and fans are unsure of who is to blame for this mess.