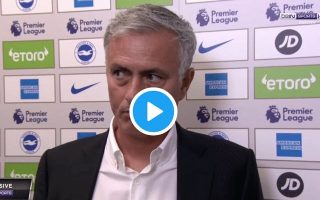 José Mourinho was understandably in a bad mood after Manchester United’s loss to Brighton and it showed in a particular post-match interview.

The Reds slipped to a 3-2 defeat to Chris Hughton’s men on Sunday, with the Portuguese tactician having a moan about individual mistakes made by his team which were punished by the hosts, who were clinical on the day.

However, when speaking to beIN Sports after the game, as seen in the video below, Mourinho didn’t respond too well to a question on the team’s communication and chemistry on the pitch.

For instance, the body language on the pitch from United players throughout the game was nothing short of pathetic. They didn’t look like they wanted to be there and it all very much half-arsed.

Clearly annoyed by the proposed question, Mourinho snapped back and told the reporter that she must be “fantastic in your job” to speak about the chemistry between the players.

In the heat of the moment, Mourinho sounded rather condescending even if the reporter was talking rubbish about chemistry. How would she know? And, did she think Mourinho would have given any other sort of response?

Mourinho is not happy.