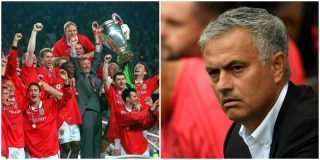 20 years ago this season, Manchester United enjoyed the greatest year in our history – the greatest achievement by an English club anywhere in history as we completed an unprecedented and unrepeatable Treble.

As a mad eight-year-old Red, my memories of that campaign are vague, but I’ve watched countless times the footage of when Ole Gunnar Solskjaer flicked the winner into the Bayern Munich net on a night that Manchester United defied all redefined logic and made the impossible possible.

Now, two decades on, I’m battered, broken and disillusioned with the club that has been my life. Disillusioned with the way the club is being run, disillusioned with a seemingly endless string of shambolic and bullshit performances and a fanbase that is more divided and toxic than I’ve ever seen. Watching United gives me no joy anymore – I do it because it’s a compulsive need, a rite of passage, and the innate sense of hope that this time, it might – just might – be different. It tells you all you need to know that watching Manchester United is now soul-destroying, spirit-crushing, and 90 minutes of perjury.

LISTEN: Podcast: Fight for the shirt or find the nearest exit | Brighton review

How did it come to this? How did it come to me feeling like this – the 2018-19 season is not even two weeks old, but yet I’m dreading the next nine months and can’t wait for it to finish? As this current crop of over-rated, over-paid and underachieving United players lurch from one abysmal performance to the next – Manchester City are already bashing teams up in the wake of an unstoppable march to the title – with the nightmare scenario of Liverpool being the only team equipped in any way to stop them. I can’t take this anymore.

I thought the infamous and inglorious Champions League elimination at the hands of Spanish outsiders Sevilla would be the nadir of Jose Mourinho’s unfulfilling United tenure so far. I didn’t think things could get any worse. I was wrong on both counts. What we saw at the AMEX on Sunday was worse than that – again United were brutal, embarrassing and a jumbled, shambolic mess of individual talents who don’t play as a team and one that somehow remains in an even worse state than it was three years ago.

This despite having spent in excess of 300 million under the tutelage of a manager who was once regarded as the best in the business. He now looks like a man without a plan and a man whose own reputation looks to have to crash to earth amid a crumbling cacophony of discontent. Not for the first time, I felt embarrassed to be a Manchester United fan. Embarrassed not just by a performance that was so far removed from what I perceive our club to be, but also that the exultant Brighton fans were taunting and tormenting us with chants of “your city is blue” and doing oles as our atrocious players showed nothing. It said it all that at 3-1 down, United never looked like scoring. Never once looked like we could get back in the game. Too many players didn’t give their all – the collective performance was totally unacceptable, a wretched and unwatchable car crash from minute one to 90.

It was a defensive horror show, a mess and a shambles from start to finish, epitomised by the dreadful performances of two Jose Mourinho centre-backs – centre-backs he spent a combined fee of £61m on last summer, in Eric Bailly and Victor Lindelof.

United’s body language was shockingly bad and our tactical set-up even worse. What even were the tactics and why was Anthony Martial even there? He doesn’t want to be at the club but yet he’s still starting for us. It was completely unacceptable, and I’ve just had enough – had enough of the manager emanating negativity, had enough of the useless board, the players that don’t even look bothered and had enough of seeing a seemingly endless run of atrocious, terrible, dire performances season in season out.

Credit to Brighton, they absolutely deserved to win and beat us on heart, desire, passion and effort alone. The minimum you expect from your team is the effort – I can’t help but feel that if Mourinho spent more time creating desire and passion in this squad than he does moaning about everything and nothing, then things would at least be a little bit better.