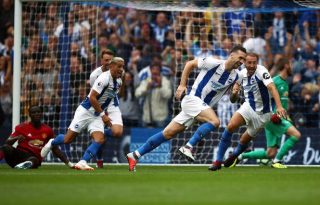 Jose Mourinho’s downbeat demeanour was almost as incoherent as his woeful Manchester United side – deservedly beaten by a ruthless and rampant Brighton team who simply, damningly, and emphatically out-played and out-fought them. The Reds were ragged and reeling, wilting in the face of an unrelenting Brighton onslaught that the team were unable to resist.

The scoreline flattered United on the south coast as Glenn Murray – the veteran 34-year-old workhorse – epitomised his team’s performance and bullied Mourinho’s £61 million central defensive pairing that he clearly has so little faith in.

On this evidence, United are joyless, listless and will struggle to finish in the top four – never mind to wrestle the Premier League title away from City who put six past Huddersfield Town. Two games into the season and it has come to this already, no fizz, no spark, no inspiration.

From him or the team. Of course, there is plenty of time and Mourinho said we cannot be judged until December, but by then City, Liverpool and a few others may be too far ahead if this carries on. The central defensive argument remains an anomaly, Mourinho may want more but the two men he has brought in – Eric Bailly and Victor Lindelof – both played and were shocking. Murray stole ahead of Lindelof for the opening goal, a corner – needlessly conceded by Bailly – wasn’t cleared for the second and the Ivorian’s reckless lunge led to the penalty from which Pascal Gross scored the third.

Alarmingly Mourinho, tense and angry on the touchline, did not seem to have an answer until afterwards when he pinned the defeat on “incredible mistakes” and aimed a thinly veiled dig that he had not been backed in the transfer market.

The injured Alexis Sanchez did not travel but there were big problems – David de Gea was a curiously nervy shadow of himself, Luke Shaw was solid, but Ashley Young was dominated, there was a lack of creativity and control in midfield and a leaden legged forward line. Paul Pogba was given a rough ride by his metronomic opposite number Davy Propper, but he at least kept trying to make things happen and he didn’t hide unlike many of his team-mates. Why Anthony Martial – a player who wants to leave – started over Marcus Rashford is beyond me. What message does it send out when a player the manager doesn’t want is still getting a start?

Brighton were better than United in every department, as they pressed and harried the lacklustre, lethargic Reds into submission – for all their desire, organisation and skill, they were helped hugely by a United side that lacked all the basic elements Brighton showed. This was a performance in keeping with so many from last season and proved that nothing has changed during United’s summer of discontent. The chants of “just like Brighton, your city is blue” were hard to take and hurt almost as much as this result and this performance. It was humilating for a team of United’s ambitions and resources and for a manager of Mourinho’s ability.