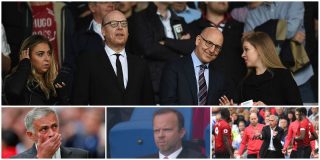 The most surprising element about Manchester United’s pathetic capitulation in Brighton was that any of us are surprised at all.

Set against the backdrop of a chaotic stewardship and a slow, drawn-out implosion of the current manager, none of us should have been caught off guard by United being comfortably dispatched by a small, yet well-run club guided by the savvy campaigner, Chris Haughton.

The players, without question, were thoroughly pathetic, melting like hot butter before Brighton even considered waving the knife in their direction. The sight of a 34-year-old meat slab Glenn Murray – not considered out of place in a second division game in 1983 – dissecting an expensively assembled but incompetent defence, seems an apt image to sum up the last six years at Old Trafford.

Podcast: Fight for the shirt or find the nearest exit | Brighton review

United, looked on the pitch, as they have been off it for the last six years – entirely lost and without direction.

As well as underperforming players – who seemed to disgracefully down tools at the AMEX Stadium – plenty of blame must shift to the manager. Jose Mourinho was never really the right fit for Manchester United and even less so since acrimonious departures in his previous two jobs.

The manner of his latest collapse has been particularly tiresome and intensely irritating. It arguably stretches back to the monotonous goalless draw at Anfield last season, when United had a golden opportunity to bloody the nose of a rival while in rare form. Unfortunately, Mourinho had United play the footballing equivalent of the director’s cut of the infamous cinematic flop, Heaven’s Gate: Ponderous, baffling and painfully dull.

Not so much letting the horse run free as trapping them in a horsebox during a heatwave. Since then, it’s become increasingly apparent that the relationship between the manager and the players has become acrimonious. Personal issues with particular players, that should remain private, have been played out publicly by various, vested interests like a high-priced edition of Jeremy Kyle.

Yet, while Mourinho was, and is, a poor fit for the club, United’s problems do not begin and end with him. Since the departure of Ferguson and Gill, the club has drifted aimlessly into the territory of an expensive farce. The two men, who acted as a bulwark against the intransigence of an ownership that they helped to bring in, were gone and their own machinations handed the wheel to disinterested, corporate leeches.

Its hardly a secret United’s owners, The G****r family couldn’t give a toss about United’s plight unless they are unable to continue siphoning away resources like the parasites they are. Studious owners, who showed even a moderate interest in the long-term sustainability of the team, would have moved to restructure the club after Ferguson and Gill’s departure, to offset a huge managerial loss, immediately.

Instead, they left things in the hands of Ed Woodward, a man with a fork in a world of soup. Woodward could not be trusted to walk into a Moroccan market stall without having given up every item on his person in exchange for an empty wicker basket.

Woodward made three terrible managerial appointments and frittered away ludicrous amounts on a parade of could-have-beens, has-beens and never-weres. One can be sympathetic to his current stance that continuing to give Mourinho money to spend when he hates the players he recruited, less than two years ago, is stupid. But you must question why he even blundered into this situation, to begin with.

Handing a lucrative new contract to a manager notorious for not last more than three years and poisoning the well, is the kind of decision you expect when a dithering idiot with little experience in football is left in charge. The steadfast refusal to employ a director of football; the lack of any long-term on-field vision; the refusal to consider a women’s team until such a position became an embarrassment and not urgently upgrading the increasingly antiquated stadium. All the actions of owners not really interested in anything other than picking up the cheque.

These are exactly the worries many of us had about The G*****s when they bought the club with other people’s money. Success requires vigilance and renewal, something a family dynasty of debt billionaires, hiding in Florida with a string of failed businesses, do not understand. Without considered guidance and leadership, Manchester United will continue to wander aimlessly from one high farce to another.