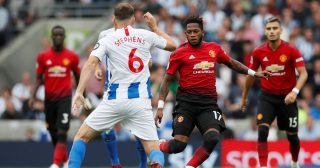 Manchester United’s trip to Brighton ended in a humiliating defeat and Jose Mourinho was not happy being asked about his side’s chemistry following the full-time whistle.

Not sure De Gea would have been expected to save Brighton’s first two goals but his distribution wasn’t up to scratch for the second. Think he should have done better for Pascal Gross’ penalty.

Can expect a lad to be rusty in his first game back, but he was also played on the right as opposed to the left. It didn’t help to that Glenn Murray’s opener came from down his side.

Had one of his worst performances in a United shirt. From the ball being caught beneath his feet to slipping over and losing his man, Bailly looked like a footballer praying for full-time.

Neither centre-back did themselves any favours against Brighton. Lindelof often looks troubled when faced with aggressive centre-forwards and that was much the same on Sunday. Needs to do better and replicate his performance against Leicester City last week.

If you take away his assist for Romelu Lukaku’s header, Shaw’s performance receives a lower rating. Make no mistake about that and Brighton didn’t seem to target Shaw as much they did Young.

Subbed off at half-time. To be a Premier League player for United a degree of consistency is required, though, quite a few of his teammates could be reminded of that. We expect Nemanja Matic to walk straight back into this season.

Expected more from our new signing but a player settling into new surroundings will always find it difficult when the rest of the side doesn’t show up. Needs to iron out some bad habits when in possession.

Made some good moves at the beginning of the match but lost his way. Needs to sort his attitude out because patience will wear thin from a fans’ perspective. Tell him Barcelona are watching and it might act like a rocket up his arse.

Subbed off at half-time. I had forgotten he was even playing.

Didn’t look arsed. Really bad attitude shown after fans travelled around the country to follow the side. I don’t agree with scapegoating one player for such a display because they were all rubbish, but he’s on the brink of turning fans against him.

Scored to give the fans some belief at 2-1 but he did squander an excellent chance when the score was level.

Gave an injection of energy but not enough impact to turn the game on its head.

Frustrating afternoon for this lad. Think he shows more than Martial; therefore, I’d much prefer Rashford to start these games in future.

Didn’t get the service to have any impact on the game.