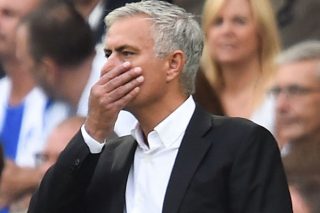 Jose Mourinho was without Alexis Sanchez on Sunday and he has unfortunately conceded that the forward may also be absent against Tottenham next Monday.

As per Sky Sports, the Chile international didn’t even make the squad for the trip to face Brighton on Sunday, with United losing 3-2.

Given his underwhelming performance against Leicester in United’s opening Premier League fixture, it’s uncertain that Sanchez would have made much of a difference against Brighton, though his attitude would surely have been better than what Anthony Martial showed.

READ MORE: Two decades on from Man Utd’s Treble: The feeling of being battered, broken and disillusioned

However, it could get worse for the Reds and perhaps better for Tottenham, as based on the timeline provided by Mourinho after the game, the former Arsenal talisman could sit out the game with this unspecified injury problem.

“I don’t know really,” he is quoted as telling the club’s official website. “Let’s wait for the results of the studies, but I don’t think it’s a big thing. I think it will be one or two weeks maximum.”

That will be a blow for United if Sanchez does remain injured for a long period of time. As far as season perpetrations go, he had a great head start to the season. This setback is the last thing he needs as he looks to rediscover his form in a United shirt.

Time will tell if his recovery speeds up over the course of the next week, but Mourinho’s latest update would suggest as though he’ll be a major doubt to feature against Mauricio Pochettino’s men.