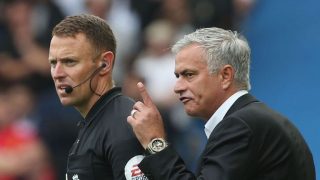 Jose Mourinho refused to publicly explore the reasons behind Manchester United’s pathetic performance which led to a 3-2 loss at Brighton & Hove Albion on Sunday.

United had two third of the possession at the Amex Stadium but only registered three shots on target – the same number as Brighton, who were far more clinical.

Brighton sat back and forced United to work for their chances. Mourinho turned to Marouane Fellaini with a half an hour remaining, but the hoof ball method was addressed with brilliantly by Brighton’s defence.

After the game, Mourinho admitted to BBC Sport that errors had cost United.

He said: “We were punished by the mistakes we made. For me that’s the story of the game. We made incredible mistakes in some crucial moments. Mistakes that killed us.

“Especially that third goal – we expected to come at 2-1 with positivity – then the third goal killed us off in the second half. Our second goal came too late.

“The week leading up was good and I expected the team collectively to be better. There are basic mistakes that makes almost an impossible mission to win the match.”

The interviewer then quizzed the boss asking if poor passing from United had been a key factor in their demise.

“I don’t want to go in that direction,” he added. “I have to learn from my reality. Last season when I was critical of my team and was debating openly the performances I was criticised for being too open about my players. I will be open when they are doing well.I cannot criticise the desire of my players.

“When we scored the first goal I thought we can win this game then the third goal comes in this incredible way. Then you try to believe the second goal could give us a chance to go for it, but it was too late.”

United have no other choice now but to regroup before their next game, when they host Tottenham Hotspur, who have won both of their first two games.

Sunday’s defeat puts a bit of an early downward spin on our season. It’s happened before and we’ve bounced back, but there seems to be a bad feeling about some of the personnel within the club.