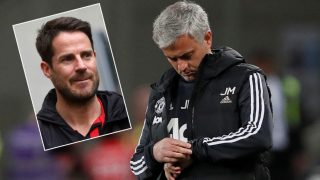 Jamie Redknapp has claimed that Jose Mourinho does not “have a clue” about his best starting line-up following Manchester United’s 3-2 defeat at Brighton on Sunday.

Mourinho made just three changes to his side for the first away trip of the season as Alexis Sanchez, Marcus Rashford and Matteo Darmian were all dropped out of the team to be replaced by Anthony Martial, Romelu Lukaku and Ashley Young.

The Reds subsequently slumped to an error-full defeat to the Seagulls but can only blame themselves. Redknapp believes that the results showed how far the club has fallen since the glory days of Sir Alex Ferguson.

“What is his best XI? I don’t think he has a clue what his best XI is,. The problem for Manchester United is you look at the other teams and they know exactly what they are trying to do and how they are trying to play, and I have never seen a team lacking so much desire to get back into a game,” Redknapp told Sky Sports News.

“How much more money can you throw at the problem? He has bought [Victor] Lindelof and [Eric] Bailly and they looked so poor today, why would you trust him to spend more money? I played against Manchester United for many years and you always expected a comeback.

“You can lose a game but it’s the manner you lose it and I don’t think I have seen United lose a game like that in a long time, where they showed no appetite to get back into it. There was a lack of desire and that is a real worry for Manchester United. Jose will get criticism but the players have to take responsibility, they can’t just hide behind the manager all the time. They are not putting in a shift. They have to do more.”

While I wouldn’t go as far as Redknapp after just two games – he wouldn’t dare say it about any other side this early – Mourinho has to take some responsibly. Whenever the lads enter the final third of the pitch they look suddenly out of ideas. It should also be a lot better defensively after two years of Mourinho but it’s still a mess.

Our approach in the second half whilst two goals behind was just as damning as the football we played before the break. It was unacceptable and the fans have every right to be angered by such a display.

The Reds take on Tottenham Hotspur next Monday night. Let’s hope for a response.