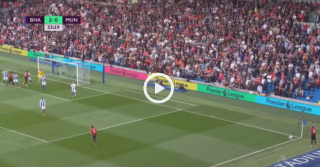 Romelu Lukaku has pulled one back for Manchester United, who trail 2-1 away to Brighton.

Some poor defending saw The Seagulls take a two-goal lead in the first half as United never really looked set to hit the high gears.

It was important to grab a goal before half-time, though, with Brighton likely to park the bus after the interval. While they’re still likely to adapt to such an approach for the final 45 minutes, their lead has narrowed and an early goal in the second half for United would pile the pressure on.

Lukaku’s first goal of the season came as a result of a corner, with Luke Shaw having a pop at goal from the edge of Brighton’s box. The Belgium star then got a touch on the ball before it hit the net.

Shaw had not been performing well up until this point and needs to wake up defensively, or else Brighton will discover another weakness in United’s defence.

Hopefully, United can continue to push on and pull off a comeback here. It would be a shame to drop another three points here after last season’s disappointing trip to Brighton.

UPDATE: Brighton make it 3-1 from the penalty spot. David de Gea got a touch on it.

Stick with us here and on Twitter for updates throughout the game.