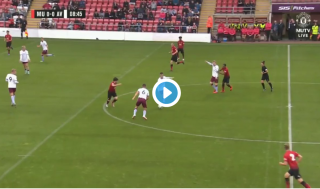 Manchester United kicked off the home campaign in Premier League 2 with a 3-1 win over Aston Villa.

DJ Buffonge’s early opener was cancelled out moments later as Villa ran up the pitch and equalised through Kelsey Mooney but further strikes in the second half, from an Angel Gomes penalty and substitute Nishan Burkart, clinched all three points.

It’s going to be interesting to see how this group of players progress under Ricky Sbragia this season and last night, his coaching methods were being assessed by Michael Carrick and Kieran McKenna, who watched on from the stands.

Tahith Chong should really have added a fourth goal near the end, following a set-up by Burkart, but his powerful shot hit the Villa goalkeeper’s forehead and the ball rebounded behind for a corner. It was clear to see from the likes of Chong that spending time with the first-team on tour of the United States was truly beneficial.

The next step for Chong will hopefully be some substitute cameos in the first team when the League Cup comes back around again.

Burkart, who had an impressive display from the bench, appeared to shrug off a late injury as the United U23s got their first win of the season under their belt.

Press Association journalist, Simon Peach, believes manager Sbragia will have to cope with more of his players going out on loan this month.

Goalkeeper Kieran O’Hara is one of the players that has already left for a loan spell at Macclesfield Town.

Told a few more of Ricky Sbragia’s Under-23 players are set to make loan exits before the month is out. Man United have already loaned out seven players this summer, including Joel Pereira, Tuanzebe & Fosu-Mensah. Plenty of scouts in attendance at the PL2 game in Leigh

Next Friday, the U23s travel to Southampton (Staplwood Training Ground). We will be producing updates on Twitter (@StrettyNews) again.