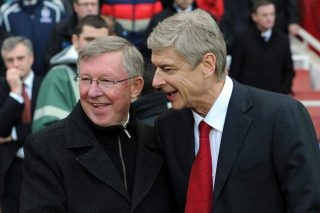 Sir Alex Ferguson only ended his bitter feud with Arsene Wenger when Arsenal stopped challenging Manchester United and “fell off the face of a cliff.”

That is the opinion of ex-United striker Andrew Cole.

Arsenal last won the Premier League in 2004 and Fergie guided United to six Premier League titles after that, before retiring with the crown in 2013.

During a conversation with David Seaman on the Re: United series, Cole reflected on the moment relations relaxed between the two managers, as per The Sun: “Only when Arsenal stopped being a threat to Manchester United.

“That’s when the managers mellowed, for whatever reason Arsenal just fell off of a cliff from being challengers every season to suddenly fading away and not even challenging anymore.

“They were not a threat to him or his football club anymore so he did not have to have any grievances or beef anymore. They were not hurting him.

“I think the respect between them now is phenomenal but only because Arsenal were no longer a threat.”

Gone are the days when Arsenal v United would bring several bust-ups on the pitch, with crunching tackles and tunnel altercations.

The rivalry has been dead for years and I’ve always alluded to Arsenal’s struggle to compete as being a key reason for that. Why would Fergie or the United players care about a weak Arsenal side when there was bigger fish to fry?

Now manager by Unai Emery, formerly of Sevilla and Paris Saint-Germain, Arsenal open a new chapter and hope it means more success. Though after losing on the opening weekend to champions Manchester City, that AFTV lot are at it again.