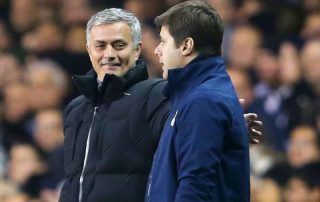 Former Tottenham midfielder turned TV pundit Jermaine Jenas says Manchester United have had their eye on Mauricio Pochettino for a ‘long time’ and believes he would jump at the chance to replace Jose Mourinho at Old Trafford.

Jenas’ claims come amid rumours that Mourinho’s future is uncertain after the club failed to secure a number of top transfer targets this summer and that he has fallen out with star player Paul Pogba.

While Mourinho has publicly denied a rift between Pogba and himself, it’s clear to see all is not well.

Speaking to the Daily Star, Jenas said: “I think they’ve been after him for a long time to be honest with you. It’d be a huge test. I think deep down that’s the one Pochettino wants.

“There’s only United and Real Madrid that I think really take his fancy.

“When you think about it, Jurgen Klopp’s not going anywhere at Liverpool. Chelsea change their manager every two minutes but the  Tottenham and  Chelsea thing would ruin everything he’s done at Spurs.

“He already said he won’t go to Barcelona because of the links with Espanyol. I know you’ve got  Bayern, PSG and so on but I think he’d prefer to stay in the Premier League or go back to La Liga.

Spurs became the only Premier League side in the history of the summer transfer window not to sign a single player in a summer window, which will be music to Ed Woodward’s ears.

However, Daniel Levy and co will jump to the excuse of a new stadium. Straight from the Arsene Wenger excuse book – available in all good bookstores.

It is worth noting that Pochettino has publicly stated that he intends to stay at Spurs and fight for the cause after recently signing a five-year contract extension, so any attempt to prise him away from a Premier League rival would take something extraordinary.