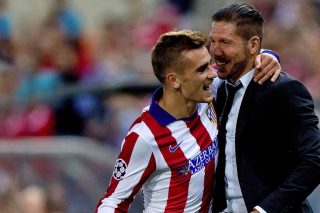 Antoine Griezmann has praised the influence of Diego Simeone when offering the primary for his decision to remain at Atletico Madrid.

The Frenchman appeared to be on the verge of leaving the La Liga club following our Europa League success in May 2017, but the move fell through after Atletico were handed a transfer ban.

It felt inevitable that he would move on this summer, with Barcelona heavily linked and his entourage even offering him to United again.

Speaking after Atletico’s UEFA Super Cup win over Real Madrid, Griezmann made note of how Simeone had played a big role in keeping him at the club.

“I stayed because there is a big project,” Griezmann said, as per MEN.

“I have confidence in this club and in Diego Simeone. I wasn’t wrong, we’ve done a lot of work and put in a huge amount of effort, the substitutes made the difference.”

Simeone has done an incredible job at Atletico Madrid but to keep Griezmann, knowing Barcelona and United were keen, ought to be considered a masterstroke.

The Argentine coach has gone toe-to-toe with Real Madrid and Barcelona, along with reaching three European finals, which warrants links to Premier League giants such as United. His football is considered “defensive”, so I’m unsure United fans will want to go back down that road after Jose Mourinho calls it a day.

But, right now, we probably shouldn’t be discussing other managers. We’ll leave that the club to evaluate.