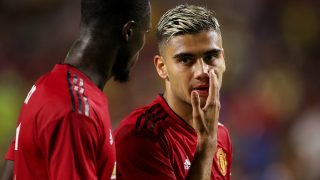 Manchester United midfielder Andreas Pereira gives his opinion on Jose Mourinho as a manager and hopes to show him how much he has improved this year.

Pereira spent three years in the United academy between 2011-2014 before breaking into the senior squad at the start of Louis van Gaal’s reign as manager. The 22-year-old has made just 14 first team appearances since then but is expected to get many more under his belt this season.

Thus far, Pereira has played for both his native country (Belgium) and Brazil at international level with their youth teams and is regarded by many to be a talented footballer with a bright future in the game.

According to Sky Sports, the young midfielder went back out on loan going against the advice of Mourinho in 2017, but he insists that it hasn’t damaged his relationship with the manager.

Pereira started in our opening game of the new Premier League season against Leicester City, impressing from a deep-lying role in a 2-1 victory.

The Reds’ star told Sky Sports in an interview on Thursday: “Mourinho is one of the best coaches in the world, and he tells you to stay, and if you go against it you’ve only got things to lose in your head really.

“We had a great year in Valencia, and I am a better player, and this season he has a better Andreas than he could have had last year.

“He hasn’t told me [that I have improved], but I think he will see this in games. I have a very good relationship with him, he is very good with me, very honest.”

It’s interesting to hear Pereira describe Mourinho as ‘honest’ as that’s the total opposite description to what he would give Van Gaal, who told the youngster he’d get game time to stop him going on loan. Sources close to Stretty News understand that Dutchman never stuck to his word.

Pereira felt betrayed by the former United manager. He wanted a loan move back to PSV in order to further develop his game, but instead, he missed out on valuable game time. When Mourinho came in, he listened and everything changed.

United fans are now starting to see a product of patience and understanding. Pereira is a fine player, versatile in many ways, and we’re looking forward to seeing more of him this season.