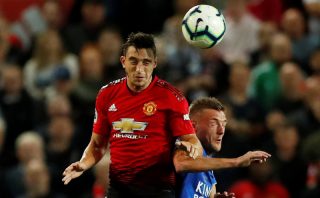 Jose Mourinho believes Matteo Darmian will remain at Manchester United, despite being linked with a number of Serie A clubs throughout the summer.

The Italian transfer market shuts this evening, which means Darmian is running out of time if his wish is to return to Italy. It is believed that Juventus, Napoli and Inter Milan were all keen to secure his signature.

But with injuries already taking a toll at Old Trafford, Darmian was handed a start for United in our 2-1 Premier League opening day victory over Leicester City.

Antonio Valencia won’t be back in time to face Brighton this weekend, so Darmian is likely to feature as a starter against the Seagulls, while new signing Diogo Dalot also recovers from injury.

Speaking to the press on Friday, Mourinho made it clear he doesn’t think Darmian will leave the club this month. He also added that the Italy international cannot have any bad feelings towards United since the club opened the door for him to move on. It just never materialised as planned for the former Torino full-back.

“I don’t think he will go, and he cannot have any bad feeling towards us because we opened the door for him in case his desire was to go but it looks like it’s not going to end in a transfer and for me is good news that Matteo is staying, he’s always an option for us, a reliable player, we know that his performance level is that one, we know he always does a job for the team, right back, left back, starting player on the bench, he always does it, he’s loved in the group by his human nature, too.”