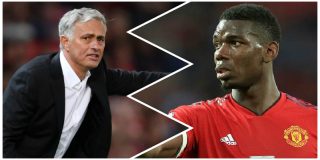 Jose Mourinho claims he has ‘never been so happy’ with Paul Pogba.

Pogba made a goalscoring return for United as captain against Leicester City in our Premier League opener last weekend but admit interest from Barcelona the Frenchman revealed afterwards: “There are things I cannot say otherwise I will get fined.”

Our understanding of the situation is that Pogba’s relationship with Mourinho could be a lot better, but it sounds as though the boss wants to fix that.

Moreover, recent reports suggested Pogba and Mourinho had fallen out over his ‘fine’ comment at Old Trafford last week, but Mourinho dismissed suggestions they have a problem with one another.

The boss also clarified the only United player he has ever fined at United is Anthony Martial.

“The truth is we are together for two years and a couple of weeks and I’ve never been so happy with him as I am now,” Mourinho said. “That’s the truth. I cannot demand more from him, I cannot ask more from him, he came here on a Monday, trained for three days, I asked for his support for his contribution in an important match for us when the team had difficulties, he did it better and for more time than we could expect.

“I don’t care,” Mourinho added of Pogba’s ‘fine’ comments. “I repeat: I want him to play well, I want him to play for that team, the fans, and that is what it is. He’s working extremely well here but I have to say in his defence, write what you want about him, write what you want about me, please don’t say lies. Don’t put him in a situation that people can think he’s not a polite, educated guy, he is a polite, educated guy. He never had a fight with me. We never had a heated or exchange of words, everything is respected, I have no problems at all.”

The reason Martial got fined was for going AWOL after he departed United’s pre-season tour of the United States after two matches and failed to return or report at the club’s Carrington training complex, therefore, resulting in 10 days of missed preparations for the new season.

“I am very confident but if he doesn’t [perform at Brighton] that’s football,” Mourinho said of Pogba ahead of Sunday’s fixture. “If he doesn’t that’s football. If his objective is to play for the team, for the fans, if this is the objective he has the right of a bad match, everybody has a bad day and has little ups and downs in the performance level.

Fans have been left frustrated by contrasting reports in the media. The Sun claimed Pogba and Mourinho were no longer on talking terms and that the midfielder would be allowed to leave should he ask for a transfer request.

Then, Sky Sports weighed in following a clear briefing from the club to suggest there was no existing rift between the pair.

Mourinho used today’s press conference to address the situation in an attempt to put it all to bed.