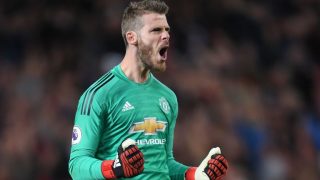 David de Gea is set to extend his contract at Manchester United in the coming days, according to journalist Jose Alvarez Haya.

De Gea is going to extend his contract in the next days. It will be a 4+1 year contract and he will be the most paid goalkeeper of the world. The deal will be announced really soon. @elchiringuitotv @JugoneslaSexta

It’s difficult to evaluate how credible members of the foreign press are without knowing what they have previously published, but we’re going to give Jose the benefit of the doubt this time around.

He claims that De Gea will sign a four-year extension with an additional year optional and become the highest paid goalkeeper in the world.

It’s only right considering De Gea is the best keeper in the world and, with Real Madrid previously hell-bent on signing the Spain no.1, United will be wary of rekindled interest in the future.

However, Real Madrid signed Chelsea shot-stopper Thibaut Courtois this summer. They will be hoping it was the right signing to address their goalkeeping issues of late, not that the Belgian is much better than Keylor Navas.