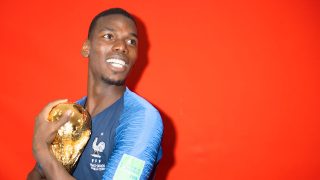 Paul Pogba went to the World Cup with concerns about his role for both club and country; he ended it on top of the world, dabbing as the heart of the team.

If ever there was a time for Pogba to show his luxurious lifestyle and obsession with dancing, this was it. He endured a terrific journey with Didier Deschamps’ men which resulted in France becoming World Cup champions for the second time in history.

The truth about Pogba is, on his day there isn’t a better midfielder in the Premier League and everyone wants to see him prove that on a more consistent basis. He was terrific against Leicester last Friday and the aim now should be to build on that, as well as sort his relationship out with manager Jose Mourinho.

Pogba has posted a brilliant video capturing his best moments from the month in which the World Cup took place. It looks back at all the celebrations, goals and commercial work he was involved in throughout the summer.

On Twitter, Pogba likes to show off his swagger. He captioned the video in English and French in order to reach out to all of his audiences, though many will argue there should be some Italian, or even Spanish thrown into the mix: “Memories of a life time create one month ago.”

There appears to be a lot of uncertainty surrounding Pogba’s future at United, with multiple reports claiming the Frenchman and Mourinho are no longer on talking terms.

These claims surfaced days after Pogba apparently popped at dig at the manager following United’s win over Leicester City by suggesting he was unhappy.

Barcelona’s interest is still brewing in the background, arguably collaborating with this mess of a situation between manager and player, though it doesn’t look like the La Liga champions will land their man this month.