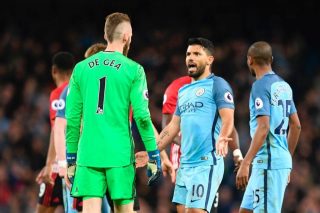 Manchester City striker Sergio Aguero has revealed he shares a friendship with Manchester United goalkeeper David De Gea, despite the huge rivalry both sides have on the pitch.

“I hang out a lot with De Gea because we played together at Athletico Madrid. We have a good friendship,” said Aguero, City’s all-time leading goalscorer, in his club’s new documentary: ‘All or Nothing’.

De Gea spent two years at Atletico with Aguero, before both completed moves to Manchester in the summer of 2011.

De Gea’s move to Old Trafford for £18.9 million has proved a resounding success, as has Aguero’s big money transfer to City. Since De Gea’s move to Old Trafford,  he has won United’s Sir Matt Busby Player of the Year award four times, a record no other United player has achieved. In the process, the Spaniard has established himself as one of the best goalkeepers in world football.

Meanwhile, United remain confident that De Gea will sign an extension on his current deal at the club. The 27-year old’s contract runs out in 2019, but according to Sky Sports, United are increasingly optimistic about extending the player’s stay at Old Trafford.

Thibaut Courtois’ move to Real Madrid this summer has ended rumours of De Gea returning to the Spanish capital, and he is now expected to stay in Manchester for years to come.