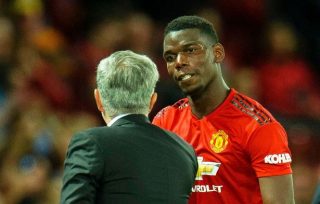 Manchester United have categorically denied that abust-up up between manager Jose Mourinho and star player Paul Pogba has taken place, following reports on Wednesday night which claimed that Mourinho is willing to sell his World Cup winner.

Sky Sports reporter James Cooper has been in contact with the club following the rumours, “United have spoken to me this morning. And they are angry, they’re incensed, they’re telling me there was no bust up between Jose Mourinho and Paul Pogba. The reports of this are absolute nonsense. The relationship between the two people is good.”

Cooper’s comments follow extraordinary reports in The Sun yesterday that United manager Jose Mourinho has told Paul Pogba that if he wants to leave Old Trafford once again, he should ask for a transfer.

This came after Pogba had voiced his frustrations to the media following his side’s 2-1 win over Leicester on the opening day of the Premier League season, claiming, “There are things I can say and there are things that I cannot say, otherwise I will get fine,”. “If you’re not happy, you cannot give your best. ” According to the report, these comments infuriated Mourinho who had described Pogba as a ‘monster’ following his man of the match display.

Pogba has not seemed 100% happy under Mourinho’s regime, after a disagreement last season which saw the player benched after a series of inconsistent performances. It is understood Barcelona are interested in the midfielder and are closely monitoring the player’s relationship with the United manager. The Spanish transfer window does not shut until the end of August so the Catalan giants still have time to bring the Pogba to the Nou Camp. However, they are still expected to chase Pogba beyond this window if United do not agree to sell this summer.

United’s positive response to any notion of a fallout between Pogba and Mourinho will bring a sense of relief to United fans worried about their star midfielder’s future at Old Trafford. Pogba is likely to retain the captain’s armband for United’s trip to Brighton on Sunday.