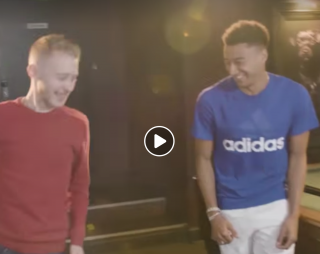 On behalf of Stretty News, I had the pleasure of spending some time with Jesse Lingard in Manchester over the summer.

Lingard and I spent hours challenging one another to some games for a Chevrolet commercial.

The first duel saw us play Rocket League. A racing/football game that’s a bit nuts, with cars flying in the air from all directions trying to knock the ball into the opponent’s net.

It’s all about getting into the next throttle-pounding match as fast as possible and, unfortunately for me, Lingard came out on top.

That was much of the case for the entire evening. I talked the talk, Lingard walked the walked.

Next up, Forza Horizon 3. This is your typical car racing game (something I’ve always been rubbish at, right Jesse?) with incredible graphics to show off Chevrolet’s large range of cars. Lingard won the majority of the races and the loser had to carry out an act of some sort. Oh dear.

It won’t come as a surprise to many to hear Lingard made me eat my words by ordering that I made an attempt at the famous Shoot Dance. With two left feet, it’s no wonder he was left in hysterics.

Anyhow, we weren’t familiar with these games as Lingard would have preferred Call Of Duty, and I’m more of a FIFA player myself.

Thanks to Jesse for a great day and Chevrolet for organising everything.