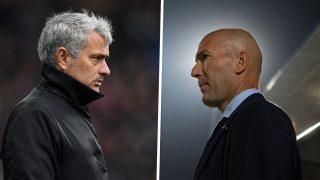 Zinedine Zidane wants to manage in the Premier League next season and is keeping tabs on Jose Mourinho’s situation at Manchester United, according to reports in France.

The 46-year-old is currently out of work after he resigned as Real Madrid manager the same week after guiding the club to their third consecutive Champions League title.

Zidane also won La Liga with Madrid in 2017, though some will suggest he did it with the best players already available to him.

The same was said about Pep Guardiola, who had a successful stint with Bundesliga giants Bayern Munich after conquering Europe previously at Barcelona. Guardiola has since gone on to win the Premier League with Manchester City, a title he aims to defend this season.

According to L’Equipe, Zidane is considering his next job and has his sights set on the Premier League.

The report suggests he is especially keen on managing Manchester United.

Mourinho knows he is under pressure to deliver success to United after failing to win a trophy last season and finishing 19 points adrift of rivals City in the league.

The boss has also been at odds with United’s hierarchy this summer after Ed Woodward failed to sign a centre-back and other targets set by Mourinho.

Tottenham’s Toby Alderweireld and Leicester City’s Harry Maguire were both targeted by Mourinho, but the club was unable to strike a deal for either player, with late attempts made to get alternatives in on deadline day.