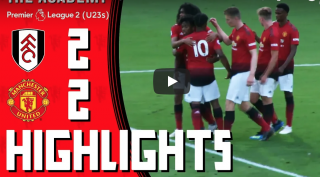 Manchester United’s U23s kicked off the Premier League 2 campaign with a 2-2 draw against Fulham at Motspur Park, with Angel Gomes and Tahtih Chong on the scoresheet.

Both youngsters were on the senior tour of the United States and Chong especially has fans excited about the future.

United scored first on 28 minutes as George Tanner delivered a cross for Gomes to head past Magnus Norman in the home goal.

However, the lead last until four minutes before the interval, when a Fulham free-kick was powered past Irish goalkeeper Kieran O’Hara.

Ricky Sbragia’s men took the lead again when a clever move involving DJ Buffonge and Gomes ended with Chong providing a superb finish. That lead was cancelled out with an 80th minute equaliser.

The U23s take on Aston Villa at Leigh Village on Friday. It will be shown live on MUTV.

Watch the highlights of our draw with Fulham below.