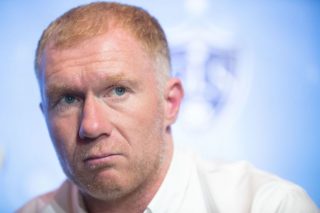 Despite our opening weekend win, Paul Scholes has raised personal concern over Manchester United’s ability to fight for the Premier League title this season.

The Reds got their campaign off to a winning start last Friday, with a 2-1 victory over Leicester City at Old Trafford.

However, after finishing 19 points adrift of Manchester City last season, coupled with the improvements Liverpool are set to make following their signings of Alisson, Fabinho, Naby Keita and Xherdan Shaqiri, there is a concern over whether or not we have enough to compete.

READ MORE: Godin reveals reason he turned down a transfer to Man Utd

Jose Mourinho saw Lee Grant, Diogo Dalot and Fred arrive this summer, but as noted by the Metro, there are question marks over the Portuguese tactician’s future at the club.

The current squad has class in abundance, with the best goalkeeper in the world, a World Cup winner in midfield, and Romelu Lukaku leading the line, but we truly struggle with consistency. Scholes is of that view, too:

“When you look at Manchester City, possibly Liverpool, I don’t think they [United] have the quality of those two teams at the minute,” he is quoted as saying by The Mirror.

“I just don’t see United getting closer to City. City are a really good side, great manager, some great players, a way of playing that they all know about and Manchester United seem to be not too sure what’s going on.

Time will tell if Mourinho can United can keep up with City, or if Scholes is right to raise concerns so early in the season. It would seem premature to make such calls this early into the season, but on the basis of Mourinho’s first two seasons in charge and a failed transfer market, there is little to be optimistic about.