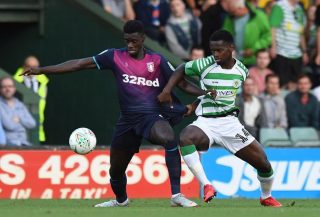 Aston Villa advanced into the second round of the Carabao Cup with a 1-0 win over Yeovil Town at Huish Park.

Manchester United loanee, Axel Tuanzebe, featured and earned a player rating of 8/10 from the Birmingham Mail. This is how they described his performance last night:

“[Tuanzebe] saved Villa on two occasions in the first half as he cleared one off the line and cleared up when Jaiyesimi almost opened the scoring. A decent display in defence.”

Last season, Tuanzebe spent the second half of the season on loan at Villa, so he’s in familiar surroundings. He struggled to cement a place in the team, which consisted of John Terry in defence and injuries didn’t go his way either.

Much more game time is expected this time around as Bruce looks to build on last season’s attempt to achieve Premier League promotion.

Watch the highlights of Villa’s 1-0 win over Yeovil Town below.