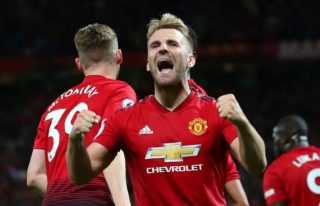 Luke Shaw has gone on record to express his admiration for Paul Pogba following Friday’s victory against Leicester City.

Manchester United got off to a winning start in the Premier League, beating the Foxes 2-1 thanks to goals from Pogba and Shaw. The former has only returned from a summer break after helping France become world champions in Russia, so there are additional expectations for the Frenchman this season.

The 25-year-old even scored in the World Cup final against Croatia, which will be remembered as the moment that he finally managed to live up to his immense potential on the biggest stage.

But can Pogba do that week in week out for United? He’s not always seen eye-to-eye with United manager Jose Mourinho since returning to Old Trafford from Juventus in 2016 and some are alluding that to be a factor behind his lack of consistency in a Red shirt.

Fellow team-mate Luke Shaw, who has also had issues with Mourinho in the past, spoke to the official website today to offer his opinion on the French midfielder, revealing how important he believes him to be for the squad going forward.

“Honestly, he’s a beast! He’s unbelievable. He only came back three or four days before the game and it just shows how important he is for the team.” Shaw said to ManUtd.com.

“He was captain and is a very, very big leader in the dressing room, as you’ll have seen that in the videos from France [at the World Cup] of course.

“He’s a wonderful guy and an even better player on the pitch. Honestly, he’s so important for us.”

Perfect timing for the club to ask such questions too, with ongoing speculation doing the rounds in regard to Pogba’s future. Though the Metro quote Barcelona director Ariedo Braida saying ‘I don’t think we’re going to move for Pogba, but he’s a great player.’

He’s going nowhere but hopefully, Mourinho and Pogba can get things back on track sooner rather than later. There’s a big season ahead of us with plenty of trophies up for grabs.