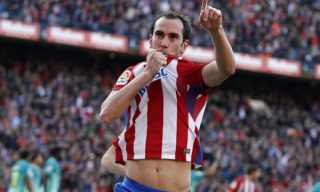 Atletico Madrid defender Diego Godin has reportedly revealed he turned down a transfer to Manchester United for ‘personal’ reasons.

This is according to the Metro, who notes that the Reds made a late approach to sign the Uruguay international by triggering his £22.5 million release clause.

However, Godin’s move to Old Trafford never materialised as the Metro state he has admitted to turning down the move for personal reasons that he did not elaborate on further.

READ MORE: Mourinho expects Man Utd to be much stronger against Brighton

The 32-year-old is also quoted by the Metro as saying he hasn’t signed a new contract with Atletico, despite widespread reports to the contrary.

‘I have no renewed,’ he said. ‘I have had offers, although I have decided to stay for personal reasons and I am only thinking about the final.’

It sounds unlikely that United will rekindle their interest in January because of his age and likelihood that his fee will go up when he eventually signs a new contract.

Leaving Atletico would have been a difficult decision for Godin, as it’s a club where he’s become a legendary icon at… Imagine Ryan Giggs or Paul Scholes getting up midway through their careers and leaving United?

Jose Mourinho could have really done with a leader like Godin in defence, but both Eric Bailly and Victor Lindelof did their jobs well against Leicester City on Friday night.