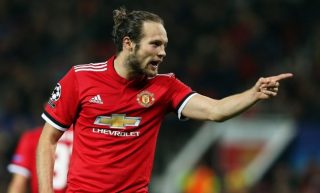 Daley Blind has revealed his admiration for Jose Mourinho after leaving the club to join Ajax this summer.

The 28-year-old was signed by Louis van Gaal in 2014 from Ajax and went on to make 141 appearances for Manchester United. He emerged as a reliable and technically proficient fixture in United’s side under his fellow compatriot’s stewardship but ultimately fell down the pecking order at the club after Jose Mourinho arrived to take over as manager.

Mourinho only ever used the Netherlands international sparingly and rather than stick around for the upcoming season, Mourinho decided to let him move back to Ajax to seek regular playing time.

READ MORE: Revealed: Which Man Utd legend Mata would like to play alongside

According to The Daily Express, Blind isn’t bitter or angry after the decision and he looks back on his time working with Mourinho positively. Speaking to reporters, he said: “I learned a lot from him. He is a winner. And he can project that very well on a group.

“I had a very beautiful time, I had many nice moments there.

“I am very grateful to the fans. I worked very nicely with Mourinho.”

Blind always struck us as a true professional and he got on with it at United, even when game time became ultimately limited. It’s good that he can reflect positively on his time under Mourinho given the stick the boss has received from the press of late for how he handles certain players.

The Reds take on Brighton away this weekend in their second game of the new Premier League season. Listen to our pre-match podcast.