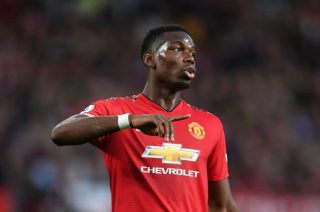 Barcelona director Ariedo Braida has provided insight into whether or not the club are considering launching a bid for Paul Pogba.

As noted by The Guardian, the World Cup winner has hinted that he isn’t entirely happy at Manchester United, casting more uncertainty over his future at Old Trafford.

This came despite being handed the captain’s armband in United’s 2-1 win over Leicester City last Friday, as the Reds opened the new season with three points.

Sources close to Stretty News continue to make it clear that the relationship between Jose Mourinho and Pogba could be a lot better, though the club has made it clear to the Frenchman that he will be going nowhere this month.

Pogba has been linked with a move to Barcelona all summer and club director Braida has been forced to respond to the speculation.

“I don’t think we’re going to move for Pogba, but he’s a great player,” he said, as quoted by The Mirror.

That may put some fans at ease, but Pogba is likely to spark interest from Barcelona and other European elite clubs in January and beyond.

The Spanish transfer window remains open for business until August 31, whereas the deadline in England has already passed, so if United were to sell Pogba now they’d be doing so without a replacement.

Losing our midfield maestro would be a massive blow in itself, but being unable to fill the void that he leaves behind immediately would be hugely detrimental to our season.