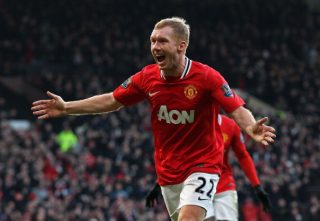 Over the course of 718 appearances for Manchester United, it’s fair to say Paul Scholes has played with some of the greatest footballers to play in Premier League history.

After representing United for so many years, he was forced into some difficult decisions when asked to name his all-star side by MUTV.

For instance, Peter Schmeichel got the nod ahead of fellow legendary goalkeeper Edwin van der Sar, who, is currently being linked with the club’s director of football vacancy.

Gary Neville was the obvious choice at right-back while Jaap Stam was picked over Nemanja Matic to partner Rio Ferdinand in the centre of defence. Denis Irwin was deservedly picked at left-back, though some will disagree and claim Patrice Evra could get into at great United side.

The former England international opted for a 4-3-3 and even omitted himself from the midfield, opting for David Beckham and Ryan Giggs either side of Roy Keane.

Do you agree with Scholes’ selections? Who would you take out to put him into the team?