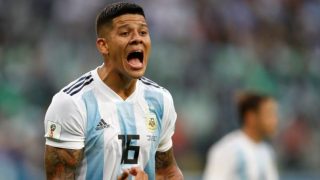 Fenerbahce will reportedly make a serious offer to sign Manchester United defender Marcos Rojo if they progress through their Champions League qualifier tonight, according to a reliable journalist.

If Fenerbahce progress in the Champions League tonight they will look more seriously into signing Marcos Rojo.
If they don’t, they won’t.

Dean Jones of Bleacher Report made the claim on Tuesday morning via Twitter.

He adds that if they crash out of the Champions League it would end their interest in the 28-year-old centre-back, formerly of Sporting Lisbon.

This update comes after The Mirror reported that United held talks with the Turkish club over a deal for Rojo.

The Argentina international played just three games at this summer’s World Cup, scoring one goal against Nigeria, but his chances of getting back into the United are slim. Mourinho wanted to bolster his defence before the Premier League transfer window closed but was unable to do so, though it still doesn’t look like Rojo is part of the manager’s plans for the upcoming season.

He is currently dealing with a knock, therefore, is not available for selection but that won’t rule out a potential move away from Old Trafford. That said, Rojo is still behind Eric Bailly, Phil Jones, Chris Smalling and Victor Lindelof in the defensive pecking order.

United could do with getting his salary off their books ahead of the winter transfer window when they should look again to bolster Mourinho’s defence.