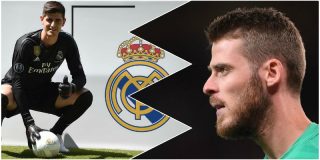 Real Madrid have been linked with the 27-year-old for a number of years, with Los Blancos’ quest to replace Iker Casillas having rumbled on since his departure from the club three years ago.

Their pursuit of De Gea should now be over following their £38 million acquisition of Chelsea goalkeeper Courtois and now United want their no.1 to reaffirm his commitment to the club – by renewing his contract.

According to The Sun, fresh terms were offered to De Gea earlier this year, with the club quietly confident that he would refute any interest from Madrid – despite the fact that his partner, Edure Garcia, continues to live in the Spanish capital.

With the path now clear as ever, United hope that the task to keep the world’s best goalkeeper has become that much easier. His current deal expires next Junes, although we have the option to extend it by a further 12 months as it stands.

The report also suggests that United will look to formalise their offer within the coming weeks.