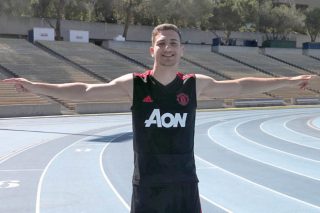 The biggest deal involved Brazilian midfielder Fred from Shakhtar Donetsk, who made his competitive debut for the club on Friday night in a 2-1 win over Leicester City.

While few United fans have seen Dalot in first-team action, it’s still exciting to see a new player join and everyone will want to see him make his debut.

Dalot signed for United despite having a knee problem, which the Reds have worked on since his arrival.

However, reports are now breaking over his return date. The Metro state that Dalot has impressed United’s fitness coaches over the weekend and has now been given the green light to take part in drills with the ball.

They add that United are confident that the defender will be involved in full training with the rest of his team-mates by the end of the week.

It’s unlikely that we will see Dalot against Brighton, but it doesn’t sound like he’s too far off.

Diogo Dalot is expected step his recovery from knee surgery this week. Mourinho confirmed the 19-year-old signing from Porto is targeting a return in September. #MUFC