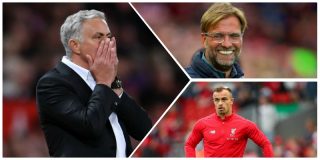 It is being reported that Manchester United lost out of Liverpool in the pursuit of Xherdan Shaqiri this summer.

That is according to Swiss outlet Blick, who also claim the forward was convinced to join the Anfield side by manager Jurgen Klopp despite strong interest from United.

Shaqiri, who spent the last three seasons with Stoke City, joined Liverpool in a £13.5 million move after his release clause was activated. He made his competitive debut, albeit not a start, for his new side in the 4-0 hammering over West Ham this past Sunday in the Premier League.

Blick suggests that the Hammers, as well as Southampton, had shown interest to acquire the Switzerland international from Stoke after he expressed a desire to leave following their drop to the Championship.

It is thought that Jose Mourinho was unable to contact the player as the deal with Liverpool had already been agreed.

While Mourinho wanted a right-sided attacker, Ed Woodward failed to deliver. Targets such as Willian, Bale and Ante Rebic were much more prominent than Shaqiri, so I wouldn’t believe for a second that the boss was set on signing him.

But, since he’s a Liverpool player now, people will try to make a mountain out of a molehill.