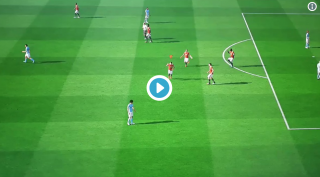 Gone are the good old days when celebrations didn’t matter after you had scored a goal on Pro Evo and FIFA. There was nothing fancy about it, maybe the odd George Best-esque arm in the air.

It didn’t matter, and, to many, it still doesn’t.

READ MORE: Mourinho expects Man Utd to be much stronger against Brighton

Still, this will please some out there. Jesse Lingard certainly saw the funny side to it by requesting EA Sports to change his haircut.

Lingard tweeted: “Can you change my haircut now please had the same trim on your game for 99 years…”

Former United forward, Cristiano Ronaldo, will return as a FIFA cover star for the new game’s launch next month (September 25) – but he won’t be alone. He will be joined by the world’s most expensive footballer, Neymar.

The pair were already confirmed to feature on the Champions and Ultimate editions of the game, but it has now been revealed that both Ronaldo and Neymar will also appear on the cover of the standard edition.

In previous editions of FIFA, the Champions League has been one of the major omissions, considering it has largely trumped Pro Evo for the rights to teams, leagues and competitions.

However, FIFA players will be delighted to hear that the new game will also include the Champions League.

I was recently in Manchester to take on Lingard in a gaming environment. Unfortunately, there was no FIFA, but he opened up about which games each United player enjoys when chilling out.

It was all for an advert which will be released in due course.

Watch the video of Lingard’s animated Milly Rock celebration below.

So if you press A when you score with @JesseLingard on FIFA 19 he Milly Rocks 😂 I wanna know who they motion cap’d for this 🤣 pic.twitter.com/pFzcSsMbsy