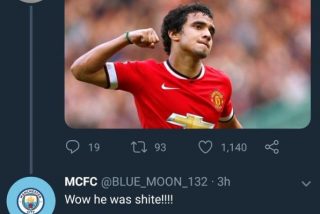 Fan account @MourinhoMindset tweeted a photo of Da Silva with the caption ‘underrated’, and it’s clear the Brazilian, currently at Lyon, appreciated the gesture.

So, when a City fan disagreed with the statement, Da Silva rightly stood up for himself, as he’s always done, by saying he had won as many Premier League titles as the Blues.

Da Siva won three titles as a United player before being sold by Louis van Gaal, which is indeed the same amount of Premier League titles as City after they won the trophy for the third time last season under Pep Guardiola.

However, City are favourites to go on and win it again this season, with people quickly writing United off and top four hopefuls. Even Liverpool are expected to have a better domestic campaign than us after an impressive transfer window.

O believe I win the same premier league titles then this badge you have as imagine on your Twitter. 🤙🤙