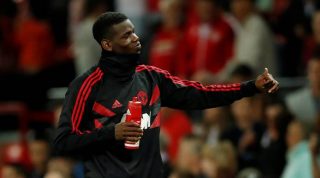 The Croatia international is supposedly attracting interest from Ligue 1 duo Paris Saint-Germain and AS Monaco, as well as Juventus and Bayern Munich, according to Spanish source Don Balon.

They also suggest Rakitic would not be happy with Barcelona signing Pogba, as has been speculated by a number of outlets in recent times.

It seems as though the possible arrival of the France international could cause problems within the Barcelona dressing, which we don’t really buy. Nor do we think Pogba will go anywhere this month, with United telling the player, along with compatriot Anthony Martial, that they’re going nowhere.

Barcelona signed Arturo Vidal this summer, while Rafinha Alcantara is back at the club after a loan spell at Inter Milan. Goal state Rafinha will stay put at Camp Nou for the 2018-19 season.

After four years at Barca, it is being reported that Rakitic would be offloaded if a big signing like Pogba was made before deadline day

The 30-year-old would improve most teams throughout Europe, so there wouldn’t be a shortage of interest if the Croatian was to force an exit.