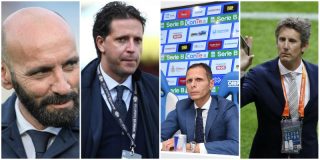 Former Manchester United goalkeeper Edwin van der Sar is reportedly among the four main candidates at the moment for the club as they search for a director of football.

The Reds are set to appoint our first ever director of football and are described as casting the net wide, with Roma’s Monchi also listed as a favourite for the role, according to The Independent.

This is another trait we’ve seen the modern game adapt and more clubs around Europe and increasingly in England nowadays, with managers now more like head coaches, which is something Jose Mourinho alluded to during his press conference last week.

The Independent note that Mourinho isn’t keen to work under such a system but suggest he may be more accepting of it now. That would make sense given the transfer window United just had, with Ed Woodward failing to deliver.

United’s recruitment process has been shambolic this summer and the club needs to hire someone to map out a plan for the future.

Van Der Sar would be a popular appointment after his years at United as a player, winning the UEFA Champions League in 2008, when he was a key figure in some of their success in the latter part of the Sir Alex Ferguson era.

He currently works at Ajax, so he has experience working in such an important role.

Let us know – out of the four candidates named – who you would like to be United’s DoF?