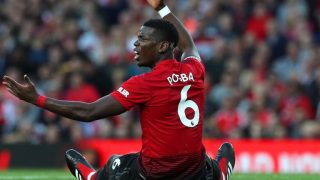 Reports suggest Paul Pogba is taking deliberate digs at Jose Mourinho in order to force a move out of the club.

This is according to Spanish outlet Don Balon, who quote Pogba’s cryptic message following the 2-1 win over Leicester City and they claim that this is all part of his plan to force a move out of Old Trafford to join Barcelona.

The France international, who played an instrumental role in his country’s World Cup triumph this summer, was expected to return to Manchester United this season and make the domestic stage his own, but now negativity surrounds the entire situation.

Meanwhile, the Telegraph is among the sources reporting on Barcelona’s long-term interest in Pogba, which could see them try again with an improved bid for the 25-year-old in January or next summer unless Real Madrid rekindle their pursuit to sign Pogba, which dates back to 2016 when he signed for United.

Don Balon add that Pogba is eager to get away from Mourinho and it is known their relationship could be a lot better. They also suggest that keeping an unhappy player could be a risky strategy, potentially making relations even worse.

It’s no secret that Mourinho is something of a conservative manager, who has struggled to get the best out of his attacking players at United. For that reason, Caught Offside believe Pogba would be more at home at a club like Barcelona.

This is a saga that could drag on all season. I’m not sure that’s a good thing as United look to improve this season, but the club can’t sell our star player without a replacement, especially on the back of winning the World Cup.