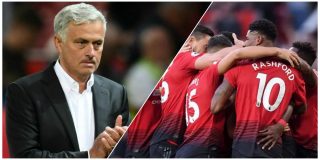 Andreas Pereira had seemingly become another Manchester United player forever synonymous with one of the darkest hours in the proud and illustrious history of our club. Of the 14 players involved in the infamous 4-0 defeat to then League One side MK Dons almost four years ago to the day, only two remain. The rest, with their United careers battered and broken beyond repair, drifted into oblivion.

Pereira – a Belgian born Brazilian who has been at the club since he was 14 – came on at half-time in that League Cup tie and looked set to go the same way. He made only five appearances in the following two seasons (scoring his first United goal, a free-kick in a cup win over Ipswich) and was shipped out for successive loan spells at La Liga sides Granada and Valencia. With the appointment of Jose Mourinho, whose refusal to develop young players was one of many accusations levelled at the Portuguese, Pereira’s days at Old Trafford seemed numbered.

However, that’s far from the case – having returned from his season-long loan spell at the Mestalla, Pereira was one of the few bright spots in an otherwise difficult pre-season for United. One of many Academy players and fringe squad members to be given a chance on Tour, Pereira featured in every game and caught the eye with his range of passing, set-piece prowess and his intuitive movement. He scored against Liverpool, albeit a goal rendered academic as they hit four without further reply.

READ MORE: Barcelona will not rule out move for Pogba, amid tensions at Old Trafford

With Nemanja Matic injured for the start of the Premier League, Pereira – our new number 15 – was given the nod against Leicester and started as part of a midfield trio alongside Paul Pogba and debutant countryman Fred. Composed throughout, Pereira is a naturally attacking and forward-thinking player. The young Brazilian was one of the main positives of United’s opening night win and continued his fine pre-season form, operating in a deep-lying midfield role in the absence of elder Serbian statesman Matic. It was perhaps a more defensive job than he’s used to, but the 22-year-old did his long-term prospects no harm at all, with a mature and intelligent performance that featured a strong range of passing, clever movement and positional awareness. He was quietly impressive, particularly off the ball, almost positioned between the two centre-backs and the way he stepped out confidently to thwart impeding danger was encouraging and rare for a young player.

When Matic returns to fitness following abdominal surgery, Pereira will face stiff competition from a player regarded as an archetypal Mourinho identikit. But nonetheless, Pereira will have given the manager a selection headache he won’t mind having.

It’s difficult to see Pereira keeping his place throughout the campaign, as Paul Pogba, Fred and Matic will form United’s regular first-choice midfield triumvirate, but he can provide competition from the bench and as a rotation player. He provides something different, some variety and a mix of assets that will bolster our midfield – certainly not a bad back up option to rely upon.