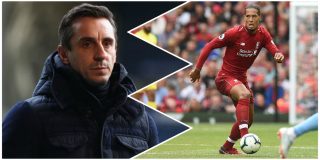 In his first podcast of the new season, Gary Neville analysed the Manchester City and Liverpool wins.

There was no real surprise from week one of the new campaign as Manchester United, Chelsea and Tottenham also got off to winning starts.

Yet Neville is of the view that the title race will go down to a two-horse race between City and Liverpool: “I think Liverpool are the side [City] will feel threatened by directly. Certainly in terms of the style of play, Liverpool have certainly got the measure of Manchester City.

“People are not feeling that way about Manchester United or Tottenham or Chelsea at this moment in time, because of what has happened in pre-season. So those teams will have work their way into City’s thoughts.”

As a footballer, Neville never hid his hatred for Liverpool and to say he has mellowed since then would be an understatement. He described Liverpool’s Virgil van Dijk as a ‘monster’ and compared him to ex-United defender Jaap Stam.

“He’s a monster, and is looking a bit like Jaap Stam. It looks like he just throws people out of the way.”

Listen to the Gary Neville podcast below.