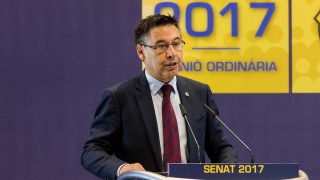 Barcelona president Josep Maria Bartomeu has left the door open on a potential move for Manchester United’s Paul Pogba, after saying the club could still do business before the Spanish transfer window closes.

The Frenchman was handed the captain’s armband for the opening 2-1 win against Leicester City, but his comments after the game hinted at tensions at Old Trafford.

“If you’re not happy, you cannot give your best,” he said. “There are things that I cannot say otherwise I will get fined.”

Can you imagine him lasting long after saying something of that nature under Sir Alex Ferguson? No, neither can we.

Asked about Pogba after Barcelona’s 2-1 Super Cup win against Sevilla, Bartomeu said, as per Sky Sports: “I won’t speak of any names, we have respect for all clubs and there are 20 days left.

“We’ll see which players come out. We’re focused on the league, so it’s best to ask [Eric] Abidal, [Ramon] Planes or Pep Segura about players.

“There’s still time to do business.”

Pogba is seen as the answer to Barcelona’s potential problematic situation in midfield. This summer, they’ve lost Andres Iniesta, Paulinho and Andre Gomes but the La Liga champions have already brought in Arturo Vidal and Arthur, with Manchester United not wanting to part with the former Juventus man during this window, especially without being able to find a replacement since the Premier League transfer window has closed.

“We are never going to find another Andres Iniesta, that’s impossible because there is only one and he is in Japan,’ said Barcelona manager Ernesto Valverde.

“That’s my plan, although everything is up in the air until the window closes.”

From our understanding, as revealed last week, United have told Pogba as well as Anthony Martial that they’re going nowhere this month. We have no reason to believe otherwise at this moment in time.