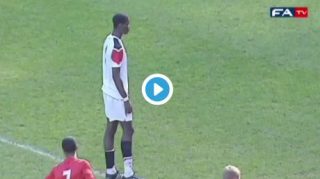 Paul Pogba caused a reaction with his cheeky penalty technique as he gave Manchester United the lead over Leicester City on Friday night.

The France international took an extended run-up before comfortably slotting past Kasper Schmeichel, but it’s not the first time he’s done it.

Manchester Evening News journalist Samuel Luckhurst took a look back at Pogba’s previous penalties and discovered that the player adopted his technique for United’s youth team at the age of 17 in front of Liverpool fans at the Kop.

He also took one for France at the age of 20, which takes even longer…

In all honesty, though, I couldn’t care less how the lads take their penalties as long as they hit the onion bag.

Pogba returned from an extended holiday on Monday after winning the World Cup with France in Russia. Since then, he’s had to deal with speculation about his future with Barcelona swarming around the midfielder.

United have told Pogba along with Anthony Martial that they’re going nowhere, so both should get their heads down and start putting a shift in. That way, we have every chance of having a successful season.

And for France aged 20 #mufc pic.twitter.com/d3eNhDm7Dn