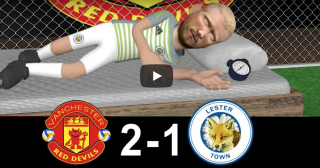 A video has emerged online of animated highlights from Manchester United’s 2-1 win over Leicester City.

In the first game of the 2018/19 Premier League season, Paul Pogba and Luke Shaw’s goals were proved enough for United to claim all three points against a decent Leicester side.

Hopefully, this is the sign of things to come for United this season but with better performances. Though as season openers go, we can’t be too negative given the lads did enough to secure three points.

READ MORE: Game by Game, Point by Point: The philosophy that could derail Man Utd following Mourinho’s summer of discontent

Mourinho was happy with his players at full time, which is a stark contrast to his demeanour on pre-season.

The video itself just shows the goals with a laughably poor resemblance of Leicester striker Jamie Vardy, along with references from each goal. Pogba took a lifetime to take his penalty, so they put a bed on the goalline for Kasper Schmeichel to have a nap on, while Shaw’s beautiful finish was pretty straightforward.