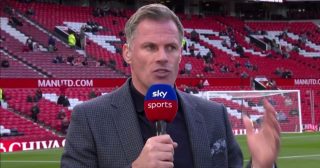 The home dressing room at Old Trafford got a facelift over the summer.

Ahead of Manchester United’s Premier League opener against Leicester City on Friday evening, the hosts unveiled the improvements they had made to the home side’s dressing room over the summer.

United gave the changing area a complete overhaul, with a circular design and cushioned seating.

READ MORE: Game by Game, Point by Point: The philosophy that could derail Man Utd following Mourinho’s summer of discontent

Three massage tables sit in the centre of the room for any players who require treatment before games or at half-time.

The home dressing room also increased in size but, apparently, that has come at the expense of away teams.

According to Jamie Carragher for Sky Sports, United ate into the away dressing room to give themselves more space.

“I remember him [Sir Alex Ferguson] at the end of the corridor screaming back at us as players, our managers,” Carragher said.

“These are different times. It was quite heated but this is what you want in a huge game.

“But this dressing room is completely different to what I can remember – it’s basically been cut in half so Manchester United can have a better dressing room that size.”